A downloadable game for Windows, macOS, and Linux

Claire's got one goal - to spend time with her friend Jamie after school.

Nothing's going to get in the way of that.

Made in two weeks for VN Cup.

This was a very engaging read! There are so many little details you can pull from Jamie and Claire's mannerisms, Claire in particular is very well rounded and intriguing. The filtered backgrounds also do the overall atmosphere a huge favour. I def wouldn't mind reading a longer version of this.

First and foremost, I love the visual styling of this VN.  The font, the interface, the portraits, the CGs and effects applied thereto—all of it is airtight, heheheh.  The effect near the beginning during the roll call scene especially is a nice touch, as is the red static effect.

Second, the use of auto-advancing text for interruptions and racing thoughts in particular is quite well executed, I feel.  I'm partial to using that effect in the same way in my own works, so it made me smile to see it here and to see it done so adroitly, heheh.

And last but certainly not least, the character writing really shines in this VN.  Jamie and Claire alike are vivid, believable, and strongly developed, and the minor & off-screen characters are solid, too!  Indeed, the codependency is almost TOO realistic, heh.

All of that is to say, excellent work, Becky~  I'm very eager to see what you make in the future!

i really liked this, claire understands, i think my favorite were the scenes about driving jamies car/trying 2 burn a memory into your head by replaying it over and over

For such a short VN there's a lot I want to say. First off, I love Claire. You did such a good job with her characterization and getting us to feel what it's like inside her head. I think my favorite moments were right at the very end in that scene with Jamie where she's ecstatic the two of them are so close physically despite what the conversation is about, and earlier when Jamie asks if she plays with toys, and the sharp, ringing panic that I could actually feel.

Claire's visceral desperation for Jamie to like her and her penchant to convince herself everything is 100% fine, despite the fact that she's realistically probably a cuple days/hours away from being discovered is... just great. It's everything I'd want from a character like her.

Also I smiled every time I saw her ":D" sprite. It really conveys everything and it makes me say "she face!!!" every time.

Jamie's also great in that way where you can't fully read her, at least to me it's unclear how much of what she says is genuine, especially with her reaction there at the end, but she's definitely the kind of girl someone like Clair would fawn over.

That final scene though. I've read a lot of storis and VNs where at some point I'm like "aaaaand cut, come on, this is the perfect scene to cut it" and this is the rare time where the scene cuts, the credits roll and I wanted to slam my fists on the table, but in a good way. That was the PERFECT time to cut it, even if it drives me up the wall a little bit.

Anyway, that's to say, I really like your VN and I love how much you accomplished with so little text and time. Jamie and Claire especially are gonna live rent free in my head from now on, and I always appreciate that from a story. You can bet I'm gonna give you a follow and read anything else you post in the future, because this was a really good time!!

ah thank you so much for your comment and that you enjoyed this! ;w; it's been a delight to see people's reactions.

I'm happy you liked the toy scene - since it was the first scene to be written and my favorite as well!

The ending! It felt like a cardinal VN sin to cut it there - but when it calls for it, you have to end it.

Thanks again for taking the time to play, and look forward to more VNs in future!

What an atmospheric story! The filtered photo bgs work really well, I love all the ominous sound effects, and the writing is really charming. I'm going to presume, based on the usage of 'mam' and the like, that the story takes place in Ireland?

The relationship between Claire and Jamie is well-realised too; you can really feel Claire's desperation to be liked. Her anxious thoughts and tendency to overthink all feel very #relatable.

I enjoyed it a lot, I think you did a great job! This story really is a gem! <3

Thank you for leaving such a kind comment ;w; I'm happy Claire's... teenage desperateness came off well! She's charming in her own way.

And yes, it does take place in Ireland! 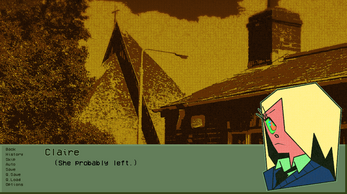 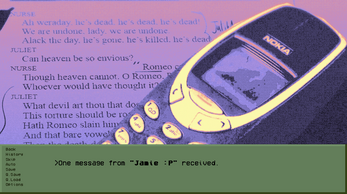 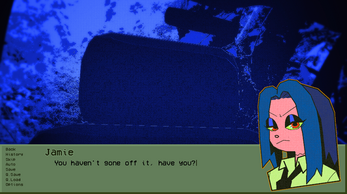 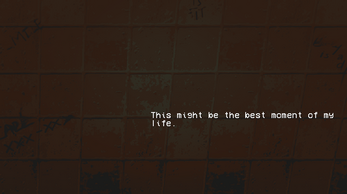 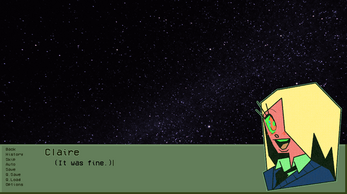